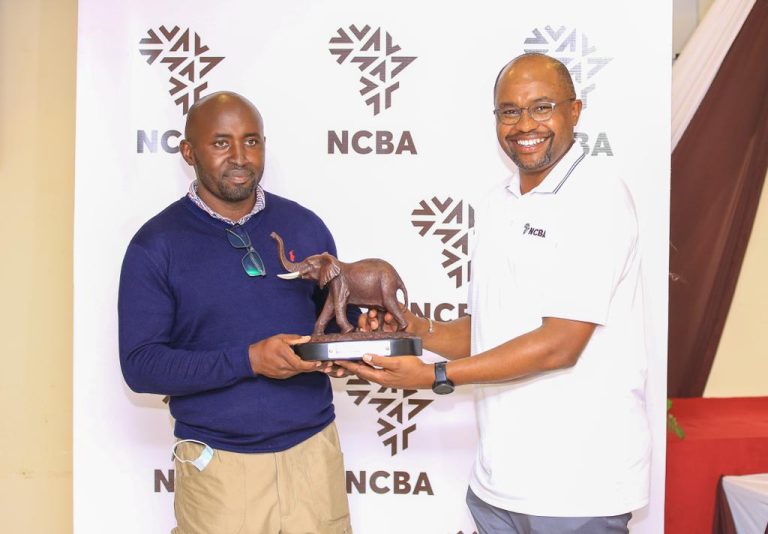 Handicap 26 golfer, Tobias Messo, carded a remarkable round of 41 points on Saturday to emerge the overall winner of the 21st leg of the ongoing 2021 NCBA Golf Series which was held at the scenic Kericho Golf Club. His stellar outing at the event saw him secure a slot to play at the Series’ grand finale which will be held next month at the Karen Country Club.

Tobias was one point clear of nearest challenger, Dalveer Hujan – at handicap 14, who emerged the winner in the men’s category with 40 points; three better than handicap 13 player, Leonard Soo, who took the runner-up position having carded a round of 37 points.

Among the ladies, handicap 22 player, Florence Kirui, posted a score of 36 points to top the leaderboard in the category; ahead of handicap 18 golfer, Eunice Korir, who ended the round with 33 points to claim the runner-up position.

Meanwhile, NCBA Group Director for Retail Banking, Tirus Mwithiga, – playing off handicap 16 – carded a round of 28 points to emerge the best staff winner at the event.

Among the juniors, handicap five, Victor Maiyo, was crowned the winner having carded an excellent round of 31 points.

In the longest drive challenge, Eric Mutai and Faith Chemutai were crowned respective winners in the men’s and ladies’ category respectively; while Josiah Omutoko, paying off handicap 25, emerged as the guest winner with a haul of 37 points.

The Kericho leg of the Series was the 21st in the 23-event calendar and drew the participation of 96 golfers; taking to over 2900 the total number of golfers who have taken part in the event since its inception in January this year.

The event took place on the backdrop of NCBA Group’s opening of two branches – one in Kericho and another in Bungoma towns – as part of its strategic plans to expand its services across the country.

The top five finishers from the Kericho event all booked a spot to play at the grand finale which will be held on December 3, 2021, at the Karen Country Club. So far, 100 golfers have qualified to play at the Grand Finale. Focus in the Series now shifts to Ruiru Golf Club this coming Saturday for the penultimate event in the calendar.