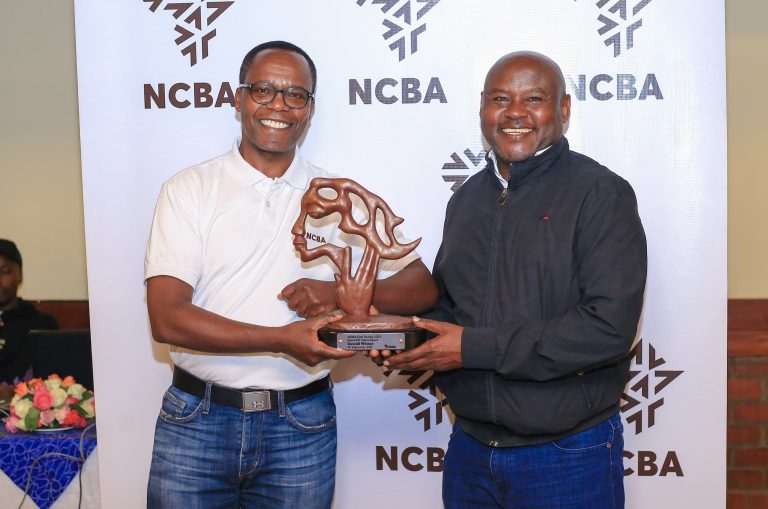 Handicap 16, Steven Njoroge, carded a round of 39 points on Saturday to emerge the overall winner of the Great Rift Valley Golf Resort’s leg of the ongoing NCBA Golf Series.

He becomes the series’ 15th overall winner and joins a team of over 70 other players who have booked their place to play at the Series finale which will be hosted at the Karen Country Club in December this year.

His effort was enough to fend off the challenge of handicap 7 golfer, Njuguna Ndung’u, whose 37 points haul from the round saw him claim the winner’s spot in the men’s category ahead of handicap 3 golfer Robin Boyd Moss, who claimed the runner-up spot with 36 points.

In the ladies’ category, handicap 30 player Nicki Farqhurson carded a round of 36 points to claim the category win ahead of handicap 24, Nanice Gichinga, who finished the day with 32 points, enough to claim the runner-up spot.

Among the guests, handicap 35 Gladys Karuri was crowned the winner after she carded 40 points; ahead of handicap 27, Michael Mwiti – who claimed the runner-up spot with 39 points; and handicap 26 John Ng’ang’a who came in third with 37 points.

In the Nines, Douglas Karuri won the first nine trophy on countback with 19 points; Nick Downs claimed the back nine win after he carded 20 points. In the longest drive contest, Cate Kimiti emerged the winner in the ladies’ category, while James Boyd Moss took the win in the men’s event.

In the nearest-to-the-pin challenge, Nancy Ndung’u was the winner among the ladies, while David Githinji won it among the men.

The Great Rift Golf Resort was the 16th leg of the NCBA Golf Series, which so far featured 15 seniors’ events and one junior golf tournament. Over 2,000 golfers have so far played in the series which first teed off in January at the Thika Golf Club. Despite the slight disruption by COVID-19, the series has weathered on to produce 75 top finishers who will play at the Series finale.

Speaking after the round, overall winner Njoroge said: “The game was tough; I blanked a hole, went into the bushes, but all in all it was very enjoyable, yet challenging, game. Hole number four was the most difficult for me, which I made near the apron, but ended up blanking it. Playing today was very exciting because I had a very interesting team which took matter lightly – making the outing enjoyable.”

Commenting on his grand finale outing later this year, Njoroge said he’ll put in extra work on the course in preparation for the event.

“I am excited, and looking forward, to be playing at the grand finale in December. I will need to practice a bit more if I am to challenge for the win. Essentially, I would like to play better at the grand finale than I did today so that I create a bit of a margin between myself and the person in second place,” he said.

Speaking after the round, resident pro golfer, Jastas Madoya, said he enjoyed the. Outing, which he featured in as a marker and which he used as a preparation event for the forthcoming Safari Tour golf tournament for local and regional pros.

“The NCBA tournament is one of the biggest we have had this year and I would like to thank the bank for bringing it here. It has brought a good challenge to our members here; you could see the excitement in their faces yesterday as they prepared for the event,” he said.

The Series saw the participation of among others, rugby sevens greats, Collins Injera, Humphrey Kayange, and Lavin Asego who all took part as guests. The Series now moves to the Leisure Lodge Golf Resort in Diani on 9th October 2021 which will also see the bank host the NCBA Diani Charity Goat Derby on 10th October at the same resort.