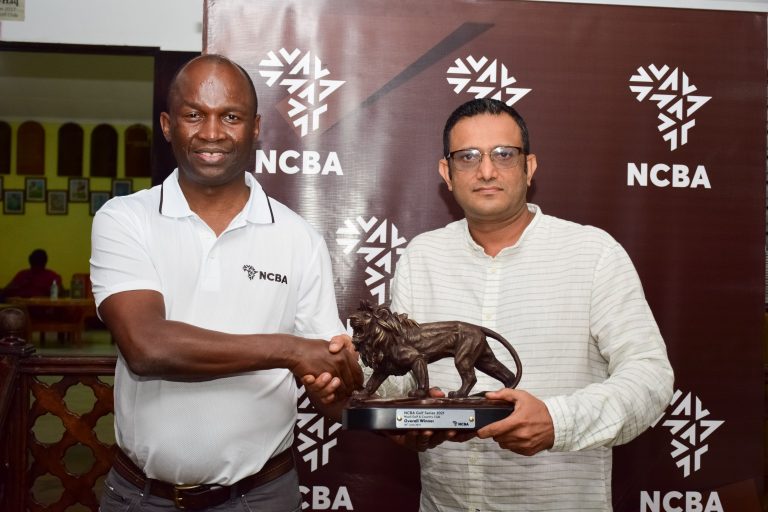 Home golfer, Anand Patel, carded a round of 42 points on Saturday to secure the overall win of NCBA Golf Series at Nyali Golf and Country Club in Mombasa County.

His impressive performance saw him fend off the charge by Nilesh Patel, who carded 40 points to claim the top spot in the men’s category, ahead of Johnson Wamunyua, who finished the day as men’s runner up on countback with 39 points.

In the ladies’ category, Glady’s Mutisya emerged the winner, having carded a round of 35 points, ahead of Florence Karimi, who ended the day as lady runner-up with 33 points.

In the seniors’ category, J.C. Patel clinched the win with a haul of 36 points, while Vishaal Patel took top honors in the juniors’ category, having carded an impressive 38 points.

In the longest drive challenge, Mombasa County’s Executive Committee Member, in charge of Transport, Infrastructure and Public works, Taufiq Balala, bagged the honors in the men’s category. At the same time, Susan Stokes claimed the win in the ladies’ event as Johnson Muriuki was the winner in the nearest-to-the-pin event.

Speaking after the event, overall winner, Anand Patel, lauded NCBA Bank for taking the golf series around the country, saying that it would encourage more people to take up the sport.

“Today was a great day, and the weather was nice. We appreciate NCBA for bringing the Series down to Mombasa. It is one which, I believe, will encourage more people to participate in and, by extension, get more people taking up golf. I am looking forward to playing in the Series finale later in the year, having won this event,” he said.

Commenting on the event John Okulo, Group Director, Corporate Banking said the Series offers a platform for the Bank to engage with customers, profiling the event as more than a golf tournament.

“We have a series of 21 events this year, and it is an opportunity for us to engage and to interact with our customers, especially during these difficult times of COVID-19 when people rarely meet. These golfing events enable us to interact with our clients in a very social manner where we get to discuss more than just business,” he said.

A total of 196 players took to the course at Nyali for the event, which was the sixth in the 2021 NCBA Golf Series, with the fifth event having been played on Friday at the Mombasa Golf Club as part of the Series’ first double-header tournament.

A total of 60 golfers took part at the Mombasa event, which saw home player Johnson Wamunyua emerge winner of the 18-hole event on countback after carding 37 points, ahead of clubmate David Ngunjiri who merged runner-up in the category on countback with 36 points. Henry Kamau emerged third with 35 points.

In the 9-hole event, home player Ammaar Waiji emerged the winner with 22 points ahead of Lawrence Gituma, who finished the round as runner-up with 21 points. Meanwhile, Amos Mbubi came third with 20 points, while Qays Mughal was crowned winner in the juniors’ category with eight points.

The Series now heads to the Nanyuki Golf Club on July 17, 2021, for the seventh leg. Winners of each event in the Series will battle it out for top honors in a series finale to be held at the Karen Country Club in December this year.