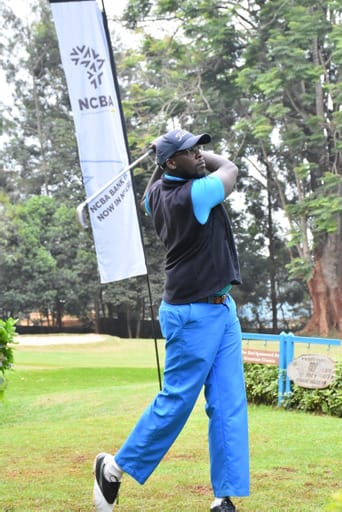 Kiambu Golf Club’s Charles Karanja Mbugua was crowned the tenth winner of the ongoing 2021 NCBA Golf Series after he emerged winner of his Club’s leg of the Series on Saturday.

The handicap 24 players carded a round of 43 points to claim the top spot, on countback, ahead of Dr. Paul Kaumbutho (Handicap 12), who was crowned winner in the men’s category. Taking the runner-up position in the category was Martin Murigi (Handicap 18), who finished the day with a round of 42 points.

In the ladies’ category, Lucy Gichimbiri (Handicap 23) took home the top honors, on countback, after ending the round with a 36-points haul ahead of Grace Kibe (Handicap 17), who secured the runner-up position.

In other events, Moses Mburu took home the Longest Drive trophy in the men’s category while Susan Kanyora claimed it for the ladies. In the junior golfers’ category, handicap 37 Alpha Ndung’u won 37 points after the round.

The Kiambu Golf Club leg of the Series was the tenth in the 21-event calendar, marking the tournament’s halfway point. It attracted a field of 176 golfers.

Speaking on the sidelines of the event, James Mugo, Chief Operating Officer, Digital Business, NCBA Group Digital Business, said the Series had received positive reception, with over 1,500 golfers taking part in the event so far.

“This has been a great competitive weekend. Since we began in January, we have seen the great progression of strength to strength, and we are looking forward to the remaining events as we take the momentum of the event over to those other clubs,” he said.

Speaking at the same event, Philip Ondieki, Club Captain, Kiambu Golf Club appreciated NCBA for partnering with the club to host the tournament, saying it demonstrates a steadfast commitment to the growth and development of the sport, as many sponsors withdraw from similar engagements owing to restraints occasioned by COVID-19.

“We are pleased that NCBA has sponsored this weekend’s tournament. It has been a difficult year with the COVID-19 pandemic, which led to most sponsors withdrawing from sponsorship engagements. We, therefore, don’t take it for granted to have NCBA here and make the day a success,” he said.

So far, the tournament has now been played at 10 golf clubs countrywide – Thika, Vetlab, Kitale, Sigona, Mombasa, Nyali, Nyeri, Nanyuki, Karen, and Kiambu, with respective winners converging at the Series finale, which will be held at the Karen Country Club in December this year.

The Series now moves to the Nakuru Golf Club next weekend for the eleventh event in the calendar.